About Midlands Women In Tech Awards

The MIDLANDS WOMEN IN TECH AWARDS are a unique opportunity to highlight and recognise the ongoing contribution of women in the tech sector.  We aim to recognise women from the whole of the Midlands region as per the map below. 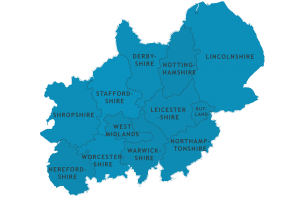 The time has never been better for women to get into technology, with information technology listed as the most in-demand skill set across multiple industries according to a survey published last year by the Recruitment and Employment Confederation.

The aim of the awards is to raise the visibility of women in this space and enable the next generation to “see it and therefore aspire to it”. Currently just 17% of those working in technology in the UK are female and according to a recent study by PwC only 3% of young women have technology as their first career choice.

Interestingly, the sphere of technology was once dominated by women, with many of the first programmers being female ; the code breakers at Bletchley Park; programmers working on the first Harvard computers; and the space flights at NASA – all women!

So why are women less confident about going into tech? At the root of the problem lies perception and this is despite women enjoying and thriving in tech roles just as much as their male counterparts. This is where the Midlands Women in Tech awards come in. We aim to shine the spotlight on all the women that are pioneering and making a name for themselves in the world of tech.

We hope that not only will this bolster opportunities for women but it will also inspire other young women to get involved and realise that they too can enjoy a dynamic, exciting and innovative career in technology.

* By Women we mean all women (trans, intersex and cis), all those who experience oppression as women (including non-binary and gender non-confirming people) and all those who identify as women.