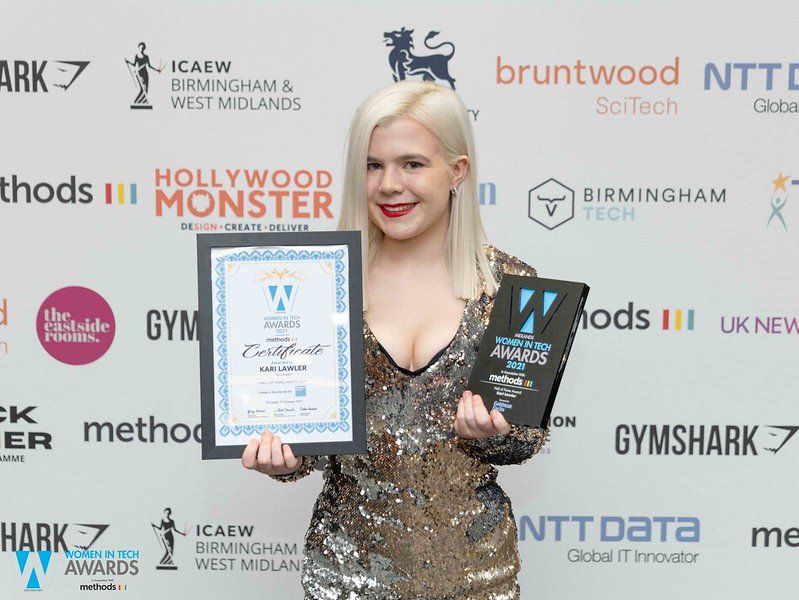 Kari Lawler, at just 18 years old, has added yet another accolade to her ever-growing list by being the youngest ever inductee of The Women In Tech Awards, which took place in Birmingham on the 7th October 2021.

Having started her journey into the tech industry in 2017 at the age of 13, through creating a virtual assistant Alexa/Siri clone which gained recognition from Google UK, Kari went on to a great number of additional triumphs.

These include winning the coveted UK SPACE AGENCY SatelLife Competition at age 14, being offered a place on the E4F (Entrepreneurs for the Future) Incubator programme in the same year, being named, Inspiring Juniors, “Most Promising Female Tech Talent” of the year and at 15 years old, being the youngest ever, winner of the Greater Birmingham Chamber of Commerce “Future Face of Technology and Innovation,” and receiving a special recognition award for “Outstanding Contribution to the City of Birmingham.”

Continuing in 2018, Kari set up YOUTH4AI which introduces the concepts of AI and tech careers to thousands of students in the region, many of whom are from disadvantaged backgrounds. She was selected to join the West Midlands Young Combined Authority Board in 2019, through which she actively works alongside the WMCA Digital Roadmap Steering Group, and WMCA Digital Inclusion Committee. She is also an official observer for the West Midlands 5G board. Within the last two years, Kari has continued to win multiple awards including, Barclays Entrepreneur Awards 2019, “MIDLANDS ICON OF THE YEAR” and recently, she was recognised as 1 of the top 100 female tech talents in the UK.

Such an impressive award résumé at such a young age, which has been increased further through her induction into the Women In Tech Awards Hall Of Fame.

At what was the second ever Women In Tech Awards event, having had to postpone last year due to the pandemic, the event organisers were incredibly excited to finally put on what was a beautiful evening.

Hosted by the former winner Melissa Snover, who took home the Innovation Award back in 2019, the event yielded an incredible energy throughout the room, some truly passionate & heartfelt speeches, as well as the camaraderie of seeing business & entrepreneurs throughout from the Midlands region fervently cheering each other on.

Jane Fallon who represented our headline Sponsor Methods talked about the strong tech eco system in the Midlands and challenged everyone present “to think what you could do differently to encourage diversity in your teams”.

This was followed by the keynote speaker for the evening the incredible Tracy Westall recently named as amongst “The Most Influential Women in UK Tech”. Tracy’s speech was from the heart as she recounted her phenomenal career right here in the Midlands!

Gurjit Jagpal reinforced the significance of tech in the region and why Goldman Sachs relocated their engineering division here.

The finalists and winners were no less impressive, reflecting the massive impact they are having in our region, huge congratulations to all the winners.

Huge thank you to our sponsors & supporters without whom it would not be possible to deliver such an amazing event.

Thank you to our headline sponsor Methods , who have supported from the beginning.

Thank you to our Diamond Sponsors Goldman Sachs & Bootcamp Media®

look forward to doing it all again next year, even bigger!
#EventsThatMatter #MWIT21

The list of all Women In Tech Awards 2021 Winners included:

The Women in Tech Awards aims to inspire the next generation of women in the technology industry and through celebrating those currently paving the way, will hopefully help bring about a more equal and representative world, especially within the Midlands and throughout the UK.

In recent years, the Midlands has become home to an increasing number of tech businesses and entrepreneurs, meaning there is certainly no shortage of talented women to look to, in order to innovate and spearhead the direction of our digital future.

Judging panel announced for the Midlands Women in...